Welcome back after half term! We've had a very busy week to get us back into the swing of things!

This week we have been learning about a Hindu festival called Holi. We found out that some Hindu's celebrated by having a water fight with coloured water. We decided to go outside and create some colourful Holi splatter paintings! 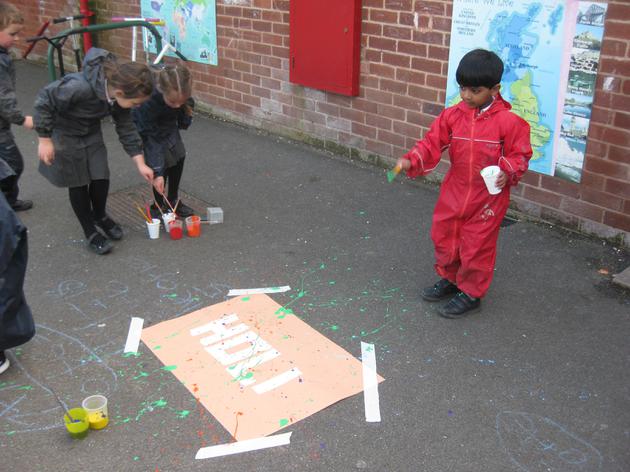 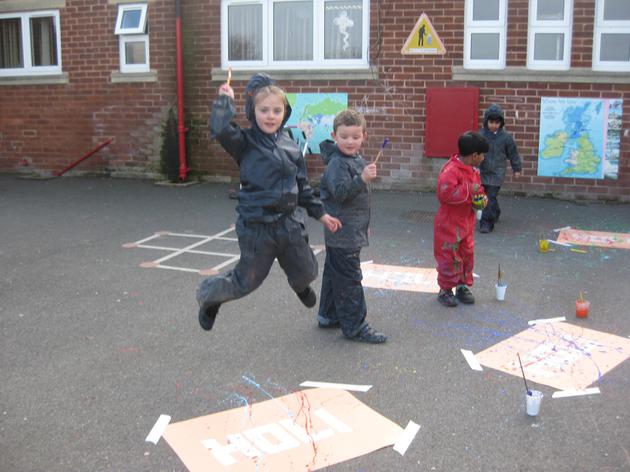 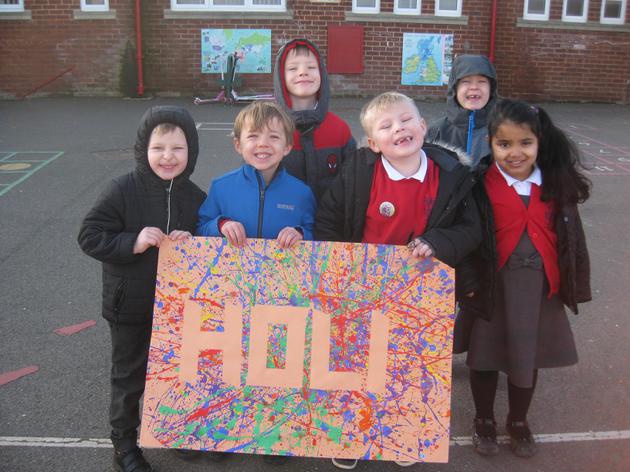 We also found out that part of the Holi festival is to welcome Spring. We went on a walk around the school grounds to look for early signs of Spring and we found some beautiful flowers by the front entrance. We decided to sketch them and the children did a fantastic job! 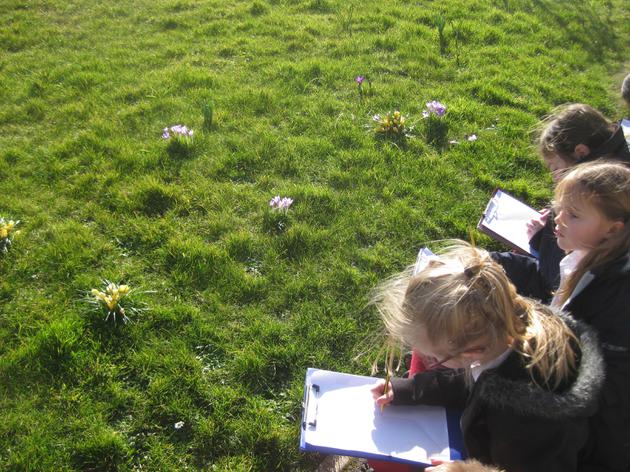 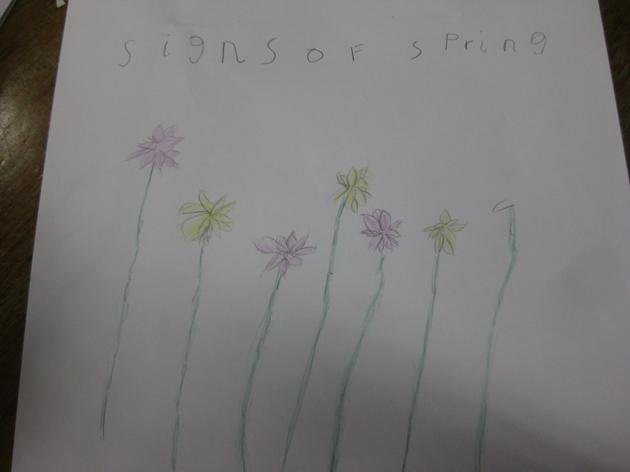 We also continued with our theme of pirates by beginning to innovate the story of The Pirate Cruncher to create our own adventure stories. We worked as a class to start with to create a story called 'The Carrot Cruncher'. Our story was all about Captain Carrot and his gang of rabbits on a quest to find the golden carrot. We had great fun and over the next couple of weeks the children will be writing their own innovated stories. 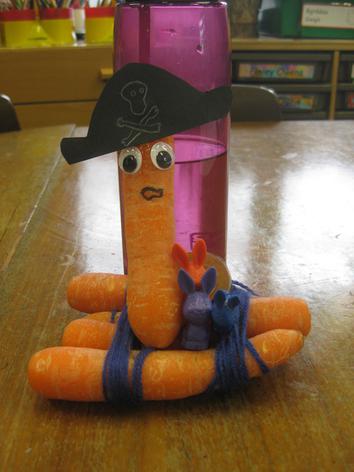 Our maths focus of the week was time. By the end of Year 2 all pupils are required to read analogue clocks for o'clock, half past, quarter past and quarter to times, and hours and minutes on a digital clock. We've played lots of games to help us read clock independently and extra practise at home would help! 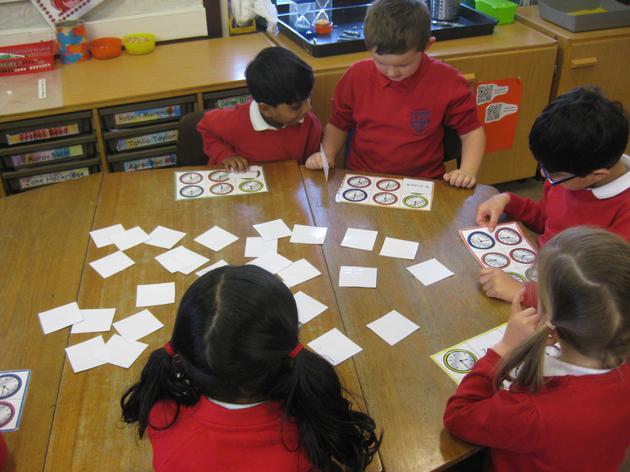 Our topic for PE this half term is traditional Welsh folk dance. This week we watched a clip of some dancers and also practised moving in time to some music. By the end of our first session, we managed to learn a few steps of Jac-Y-Do.

We continued with our collaborative learning project this week by solving a snack shop problem. In the problem we find out that each child that visited the shop bought two items, but we don't have all the information about what they bought. The children worked in pairs to share clues to fill in any gaps in their information. 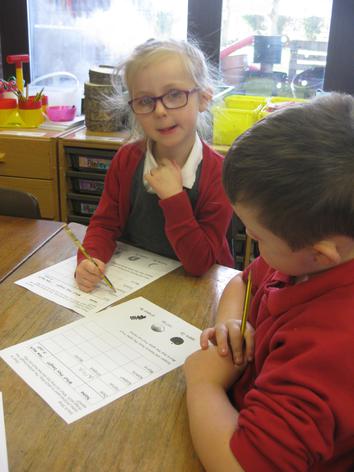 We have had a busy week learning all about Chinese New Year. At the beginning of the week we watched a video about a girl called Abbie who celebrated Chinese New Year with her family. The celebrations looked very exciting and we decided to join in by creating our own Chinese lanterns. We had to listen very carefully to the tricky instructions.

We also listened to a story about the twelve zodiac animals. On Tuesday we played some more collaborative learning games, this time all about Chinese New Year. Our favourite was '4 in a row' where we had to listen to a statement and put our card on a picture that matched with the aim of getting 4 in a row to win. 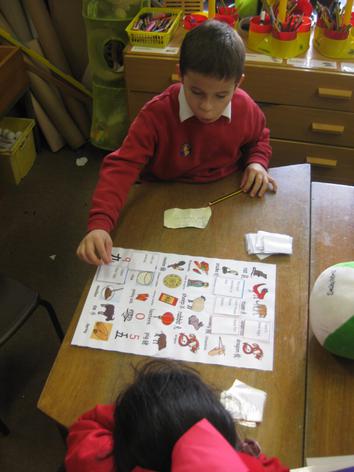 Tuesday was also Safer Internet Day and the eCadets team taught us all about how to stay safe online. We talked about what we use the internet for and how we access it. Then we created our own Safer Internet superheroes. 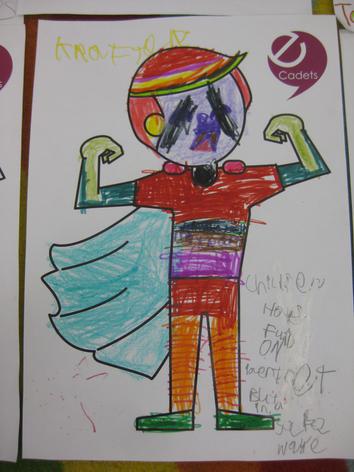 This week our homework projects were due and the pupils had great fun testing their ship designs in the water area. We made predictions about which would float and sink, and also discussed how we could improve our boats if we were to make them again.

Our final job for the week was writing a message in a bottle to send from a desert island. We had to write about all of our senses to give our rescuers lots of clues to find us! By the end of the week we re drafted these into our best books.

Our maths focus for this week has been doubling. The children need to be able to recall doubles quickly to help them with addition. Over the week we have played lots of games to help them to understand what doubling means, including an outdoor beanbag game with the bonus doubling round and practical activities with cubes/counters. By the end of the week most of the children were able to recall doubles to 10/20 and some have moved on to work on near doubles (e.g. I know that 2+2 = 4, so 2+3 = 5)

One game on the iPads was particularly popular. Click the link to have a go at home! https://www.topmarks.co.uk/maths-games/hit-the-button

In literacy lessons we focussed on writing sentences that made sense and used capital letters, full stops and adjectives.

We also carried out an investigation as the children wanted to know if the size of the sail on a ship would effect how fast it moved. We made predictions and then tested the different sized sails. We then discussed the results and decided if the test had been fair or not.

In PE we took part in a yoga session and the children were fantastic listeners!

On Wednesday afternoon, two of the Digital Leaders visited our class to help us learn how to code. We used turtle on Hwb (jit5) and the children were very enthusiastic to continue! 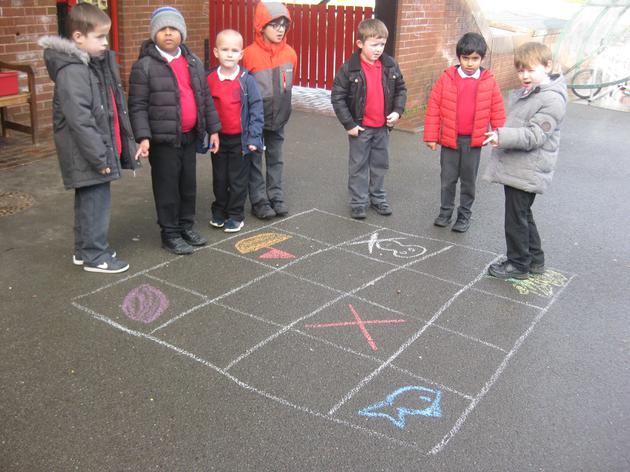 We then went on to money and giving change. We have been using bar modelling to help us find how much change we would get from 10p/£1 (spending multiples of 10p) in the sweet shop, pirate store and bakery. By Friday we used bar modelling to start a problem solving activity that we will continue next week. 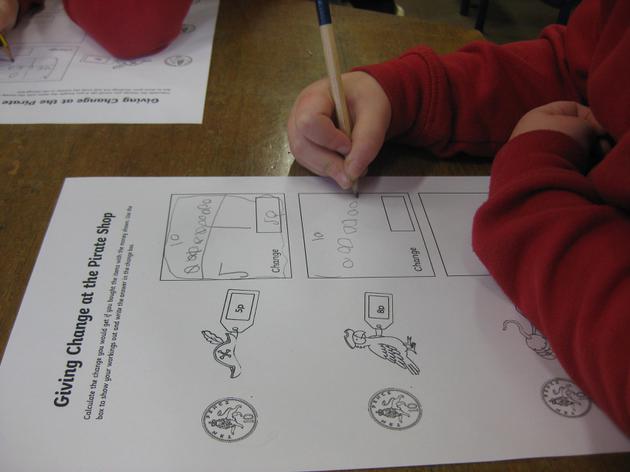 Our literacy focus for this week was writing a message to Jonny Duddle (author of 'The Pirate Cruncher') that we could send on Twitter. The children had lots of lovely things that they wanted to say to Mr Duddle and I was really impressed with their writing. Da iawn pawb! 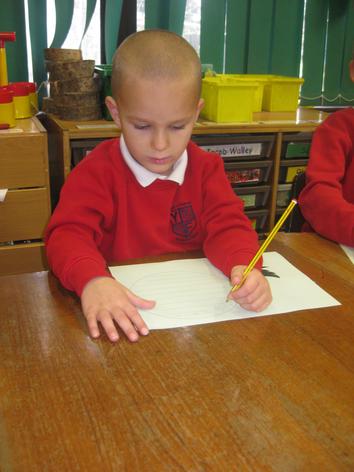 In phonics time, group 1 have been focussing on reading and writing CVC words (consonant-vowel-consonant). They have played CVC bingo, snakes and ladders, and roll and read games.

Group 2 have been focussing on the ai sound. They have played the ai roll and read game, and created ai sentences.

In PE we played sharks and pirates, where the children had to climb on the equipment to avoid the hungry sharks! Mrs Constanzo also took a group outside to navigate a blindfolded obstacle course in partners. 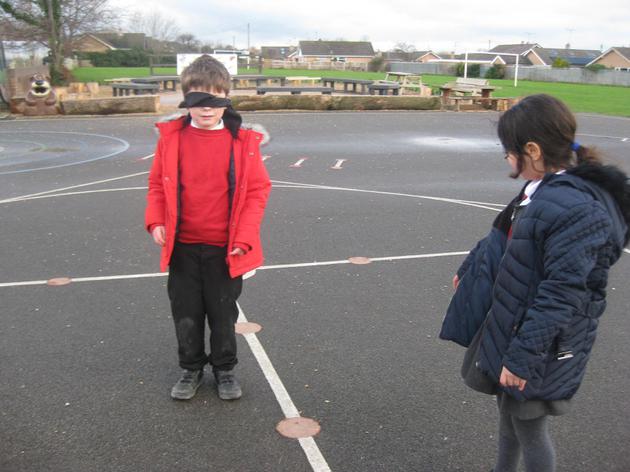 Welcome back! I hope you all had an enjoyable Christmas break.

This term our topic will be pirates and when the childrern came in on Tuesday they recieved a letter from Captain Blackbeard sending them on a treasure hunt! We had to follow the clues to find his treasure chest and inside we found a story book called 'The Pirate Cruncher'. The children loved the story and are very excited to learn all about pirates. 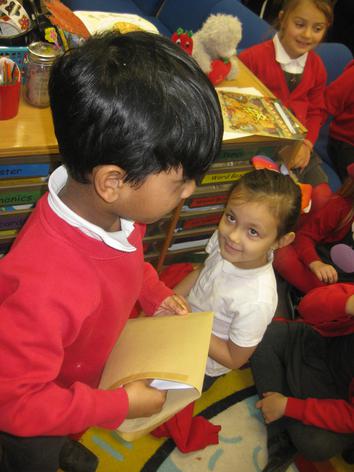 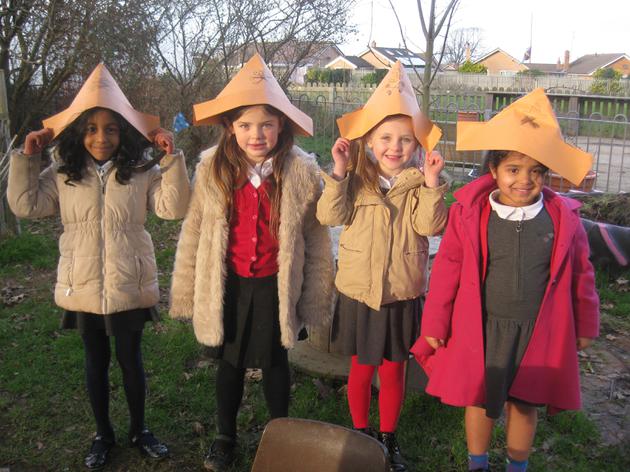 In literacy lessons we have been writing all about our treasure hunt and the children have produced some fantastic writing!

In maths we focused on temperature as the children were very excited about a new thermometer that we have on the classroom window. They have been tracking the changes in the temperature carefully and we have used this opportunity to practise finding the difference between two numbers.

We also introduced the vocabulary clockwise and anticlockwise. We worked outside to create clock faces on the yard and challenged our friends to turn in different directions. We also worked with the beebot, giving it directions to move around a treasure map. We will continue with this next week. 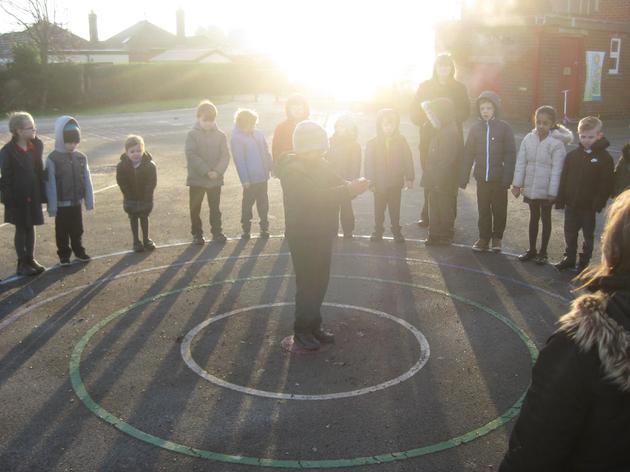 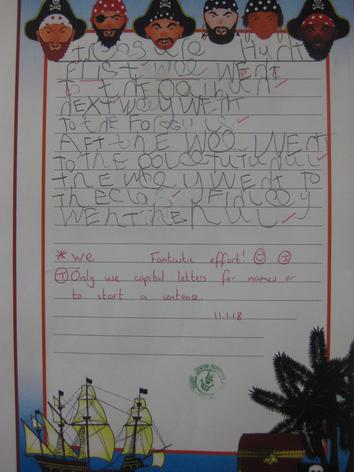 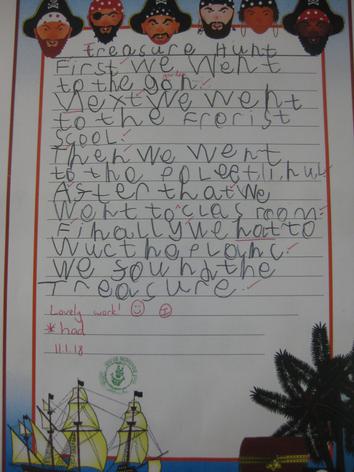 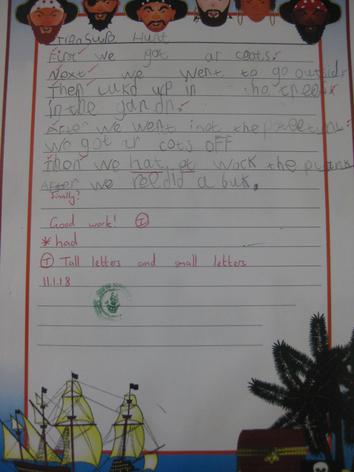 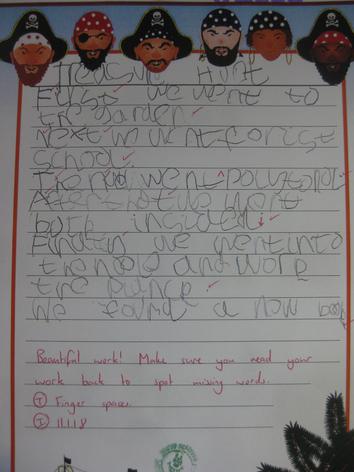 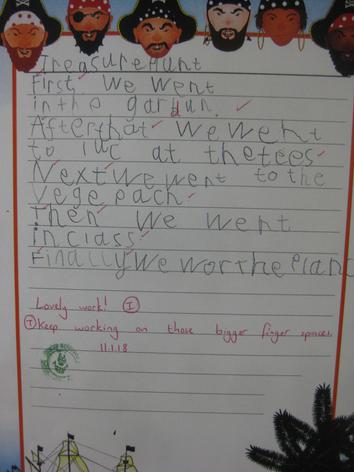